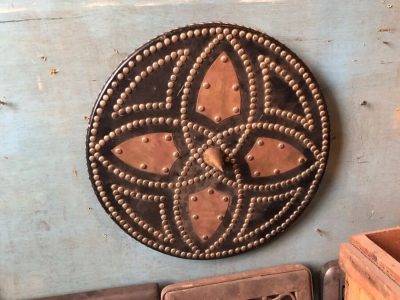 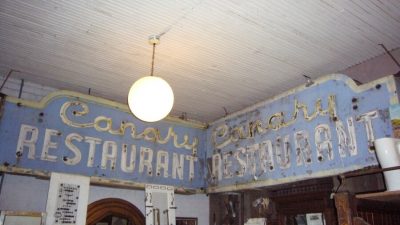 For over 50 years, Jim Addison collected pieces dating back to the early 20th century. Addison’s Inc has been the spot for movie production companies and prop houses to find period pieces. Many props have been used in such movies as IT, a lamp from The Shape of Water, a shield used in Hannibal and an 1800’s bedroom suite used in the series Reign are just a few to name.

Many other collectable and cool items are jam-packed into the three-story warehouse that will be closing its doors permanently after the auction. The vintage Canary sign from Toronto’s iconic restaurant that was open from 1950-2007 will be up for bids, a stunning chandelier from Toronto’s St Michael’s Basilica Cathedral, a beehive jar that recently sold at another auction for $1,200. Over a thousand pieces are lotted, including The Sovereign of the Seas or also known as the Royal Sovereign, a model ship 48″ wide by 40″ high enclosed in glass, is understood to be a replica model of 1637 Built by Phineas Pett and his son. The actual ship weighed over 1000 tons and carried a crew of 600 men handling over 100 guns. Built by Bill Milner, an Ottawa army Major from WW11, the intricate carving and attention to detail is unsurpassed.

“It is incredibly humbling to have the honour of auctioning off these historic pieces,” said Jeff Schwarz, also known from his international OLN series, The Liquidator. “It’s not every day you can buy a chandelier from Toronto’s oldest church or a prison table from the Suicide Squad.”

The auction is being held March 23 & 24 starting at 10 am and will be managed by both The Liquidator and Don Reinhart of Storage Wars. Don has been meticulously working on sorting through all the incredible pieces over the past few weeks. “What’s really awesome is people can come to the actual live auction on site, while we simultaneously take bids live online from all over the world. It promises to be an exciting auction.”

“From cast iron antique radiators to lighting to furniture and more, the massive onsite live and online auction will be something to witness,” says Teresa Addison, daughter of the late Jim Addison. “I walk the floors of this “would be museum” and it brings back so many amazing memories. Once gone, I’m happy I will still be able to see some pieces in movies they were used in like Million Dollar Baby and Cinderella Man. It’s been quite a ride, and I am confident this one of a kind piece will be admired and cared for, for many years to come.”

Be a part of the excitement and prepare to get transported back in time to an era when wrought iron, stained glass, chrome, brass and wood were the materials of choice.

About Jeff, The Liquidator

Jeff Schwarz has been in business for more than 25 years buying and selling pretty much everything. From liquidating merchandise in the streets of India to buying furniture in Indonesia and doing deals in China, Dubai, Canada, the United States and Central America. Jeff has also had a successful TV show called The Liquidator that ran in over 100 countries with over 5 seasons of him doing business liquidating items and dealing with eccentric buyers and sellers.

Jeff Schwarz has been featured on:

– The Rush on Shaw TV

– An announcer at the Canada Reel Screen Awards & Leo Awards

– Plus Numerous Appearances in TV and Movie

Don Reinhart has been on 72 episodes of Storage wars Canada (OLN) 6 seasons over 150 countries around the world. Storage Wars Northern Treasures (A & E) USA has been invited to TIFF Breakfast Television. Over 50 years in the auction business (livestock, vehicles, antiques, real estate, collectibles, airplanes, lockers, etc).