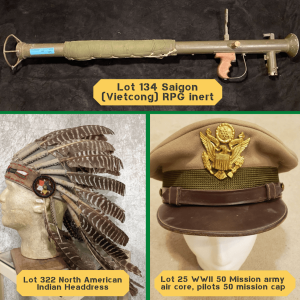 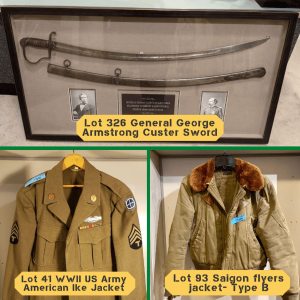 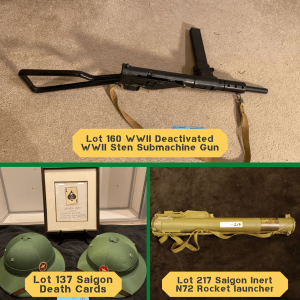 General George Armstrong Custer’s imperial German light cavalry sword embodies a historic and eventful time in American History. Originally given to Custer’s brother, the consignor believes he’s the 8th owner of this sword of the most famous American Generals. George Custer was notoriously young when he rose to fame as he was nicknamed the “Boy General” during the Civil War. He impressed many during his stint in the Civil War as he was known for his bravery and brashness. Own a rarely offered piece of history that is highly collectable and is certified for its authenticity.

“This is truly a priceless piece that is highly collectable and is certified for its authenticity,” says Jeff “The Liquidator” Schwarz.

Furthermore, George Custer was known for being a publicity hound taking advantage of every opportunity to be in front of a camera and the newspapermen. His sword followed him everywhere and he had quite a bit of success with it as he was known to be brave and brash. Custer rode into war and for the most part remained unscathed. This Saber used by General George Armstrong Custer in many battles is a living piece of history. Take a look at the video featuring this sword and further details for the Military Auction hosted by Direct Liquidation.

Attention was important to Custer and in 1863 at the age of 23, Custer was promoted to brigadier general of the volunteers army. At this time he decided to sport an unusually flamboyant uniform that made him the focal point of attention.

“Custer has made his mark in history both for better and for worse but nevertheless, he is an important figure in American history,” says The Liquidator, Jeff Schwarz.

Additionally to his interest to be in the public eye, Custer was quite the intellectual when it came to war and battle. Custer prevented General J.E.B Stuart from attacking Union troops and concurrently captured many Confederates fleeing south after the Union victory at the Battle of Gettysburg. This was only the beginning of the rise of General George Armstrong Custer. Custer married a woman named Elizabeth “Libbie” Bacon in December 1862 as they fell in love despite her fathers misgivings. They were devoted to each other even though Custer was known to gamble and have affairs throughout their relationship. Interestingly, the couple did not have children as all their free time was consumed by growing Custer’s fame. The couple would host salons in their homes and cultivated a number of journalists in the East.

In the Shenandoah Valley Campaign in 1864, Custer fought alongside Major General Philip Sheridan. Here he would also appear on the cover of Harper’s Weekly, thus adding to his appreciation of being in the public eye. Custer and his men took part in the Battle of Appomattox Court House which led to the end of the war in the spring of April 1865. His valiant efforts here was covered in the national newspapers and therefore resulted in Custers promotion to major general of the volunteers. Interestingly enough, throughout the battles Custer remained unscathed and this produced a term called “Custer’s Luck”.

Using his “Custer’s Luck” George Custer entered his infamous final battle, Little Big Horn. Custer was almost absent for this battle as he was busy with politics and controversies regarding Ulysses S. Grant’s presidency. Custer leaked many details in a Congressional hearing in Washington, D.C. against Ulysses S. Grant provoking Grant to remove Custer from command of his troops. Several high-ranking generals intervened regarding Custer being removed from command and only after, was Custer allowed to return to his post.

The last battle for General George Armstrong Custer started on June 25th 1876 as this was deemed “Custer’s Last Stand”. After spending many days marching, Custer’s scouts found the camp of Native Americans and fearful they might escape, Custer decided to immediately attack, dividing his troops into 3 battalions. Custer and his 210 men headed into the Battle of the Little Bighorn where he and all his troops were to perish and never be seen alive again. The dead bodies scoured the land and were mutilated and scalped. The only body that was not mutilated and scalped was that of General George Armstrong Custer. It is widely believed that this was a nod of respect for Custer, even from the enemy.

Nevertheless, although playing a large part in ending the American Civil War, Custer remains a highly controversial figure for his genocidal efforts against Native Americans.

Jeff Schwarz has been in business for more than 25 years buying, selling, and auctioning valuable items globally. From Selling movie sets and highly collectible merchandise in China, Dubai, Canada, United States and Central America, Jeff has made a name for procuring and selling quality goods. Jeff Schwarz has also had a successful TV show called The Liquidator which is currently featured on Amazon Prime Video and Game TV. The show ran in over 160 countries with over 5 seasons of him doing business liquidating items and dealing with eccentric buyers and sellers, meanwhile acquiring the best returns for his consigners. Awarded Top 3 Reality Show in the World at Banff Film Festival, Jeff’s motto believes in bringing buyers and sellers together with everyone winning.