Hall of Fame and Legendary shooting guard, Michael Jordan, who won no less than six NBA titles with the Chicago Bulls during his esteemed 15-year-career, led the Bulls to two unprecedented three-peat championships during the 90s that saw the Bulls dominate the NBA and Jordan ascend to greatness.

An MVP Gold Wilson Basketball signed by six-time Finals MVP Michael Jordan is rarely up for auction. However, Direct Liquidation has managed to present not one but 2 precious pieces of authenticated Michael Jordan collectibles that will be going up for auction on October 24, 2021. One signed Gold Basketball and a special piece of the original Chicago bulls stadium floor, sighed by Michael himself.

Jordan left an indelible mark on the NBA with his five NBA MVP Awards, 14 All-Star Game selections, while also earning 10 NBA scoring champion honours and is widely considered the greatest basketball player of all time. Jordan’s staggering six Finals MVP Awards are still an NBA record, and Jordan was enshrined in the Naismith Hall of Fame in 2009. 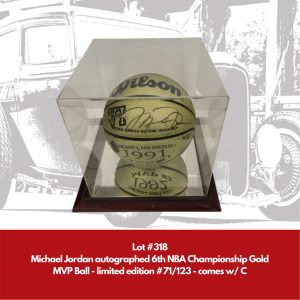 Jordan signed on the panel labelled “MICHAEL JORDAN SIX-TIME FINALS MVP” with a black marker. The golden paint on the basketball and Jordan’s autograph are both in superb condition, shining bright to remind us of an eminence era. The basketball also comes with a COA from Upper Deck Authenticated (C8X10) – the largest among only a few sources of Michael Jordan’s legitimate autographs. 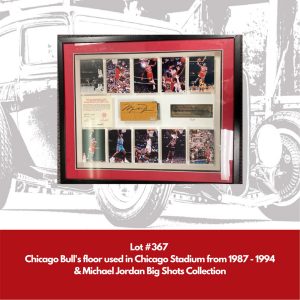 In addition, Direct Liquidation is thrilled to partner with RCS Autohaus to bring this action to the public both online and in-person at a supercar show in Burnaby BC they are holding Sunday, Oct 24 “this will be fun for the whole family “continues Jeff. Moreover, this will be for a great cause. 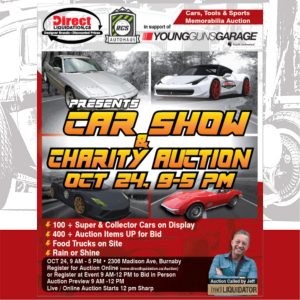 A donation will be made to Young Guns Garage from the auction proceeds to support this amazing group teaching at-risk youth mechanics and auto painting skills to kids. “I’m honoured to work with Direct Liquidation in support of Young Guns garage to help these great kids”, we are expecting over 100 super, collectible and hot rod cars to come to the big event along with food trucks,” says Q, owner of RCS Autohaus.

About the collector:
“We are honoured to bring to you a super extraordinary and desirable collection of sports memorabilia collected over the life of Rick More.” – Jeff the Liquidator

The story about Rick and his amazing collection will be auctioned off Oct 24 and Nov 6, 2021, through Direct Liquidation:

Rick was born in Toronto, Ontario Canada. He was born a collector. His lifelong passion for sports led to this elaborate collection. During his life as a printer & publisher, he has relocated from Toronto to Denver Colorado and Dallas Texas. His passion for golf and hockey expanded into Football, baseball and NASCAR.

He also loved antiques and saw the value. Travelling allowed Rick to expand his search for collecting. His wife Sandra and 3 children, Leanne, Ryan and Melissa were involved in facilitating his passion or as they often thought enabling him to pursue this passion. Rick’s personality was larger than life. He had a vast interest in EVERYTHING!

He was active from an early age in hockey and golf and enjoyed athletics right up until the end of his life. He never lost that passion throughout his life and could turn his hand to anything. During retirement, he renovated a beautiful estate home for his family and the happiest moments were spent “at the lake” with his favourite people who called him Papa.

Rick was very concerned as to how his lifelong collection would be handled. Adding to someone’s collection or passions of interest would please Rick as he was a generous man who was dearly loved.

With worldwide shipping, anyone, anywhere can access this epic online auction, for free. This makes it possible for sports collectors and basketball fans to participate.

Michael Jordan is already an iconic athlete worldwide. His autograph memorabilia and trading cards have already been high, but it has gone up and up and up with this recent period, more and more new collectors and new people have joined the clan and the value of such items has gone up higher than ever.

Jeff and his team have been successfully making rare and highly collectible auctions for some time now. There is always something for everyone from exclusive one-of-a-kind pieces for discerning buyers to fun memorabilia and collectibles from movie sets, estates and other collectors. As Jeff calls the auctions live and online, it always guarantees to be a good time.

About Jeff Schwarz, “The Liquidator” & Direct Liquidation:
Jeff Schwarz has been in business for more than 25 years buying and selling pretty much everything. From selling valuable assets all over the world to liquidating merchandise in the streets of India, and buying and selling collectible assets in China, Dubai, Canada, United States, and Central America, Jeff has made a name for procuring and selling quality goods. Jeff Schwarz has also had a successful TV show called The Liquidator which is currently featured on Amazon Prime Video and Game TV. The show ran in over 160 countries with over 5 seasons of him doing business liquidating items and dealing with eccentric buyers and sellers. Awarded Top 3 Reality Show in the World at Banff Film Festival, Jeff’s motto believes in bringing buyers and sellers together with everyone winning. Jeff is the owner of Direct Liquidation.